Or rather, good, relentless attack ads work. Everyone has seen how effective attack ads are in political campaigns. In fact, they’re so effective that they are the dominant form of advertising during election cycles.

But even outside of the political realm, good attack ads that consistently hammer the opposition often succeed, as long as the attacking brand has a solid position, a valid attack angle, and a long-term plan. (Long term is essential because in the real world, even lies, if told often enough, forcefully enough, eventually become accepted as truths by many people.)

Note that we’re not categorizing comparison advertising as attack advertising. We’re referring here to full frontal assaults on a brand’s position, status, and even good name.

And also note that a successful attack advertising campaign works best if the ads do not present an easy opening for counter-attack and if the target company does not aggressively and effectively fight back. Following are two examples.

This first one from Audi was blatant in calling out BMW, but didn’t really have any meat behind it. Moreover, not only did it leave an opening for BMW, they responded aggressively and brilliantly. Look at billboard that BMW put up next to the original Audi billboard within days of Audi’s. One word destroyed Audi’s attack. 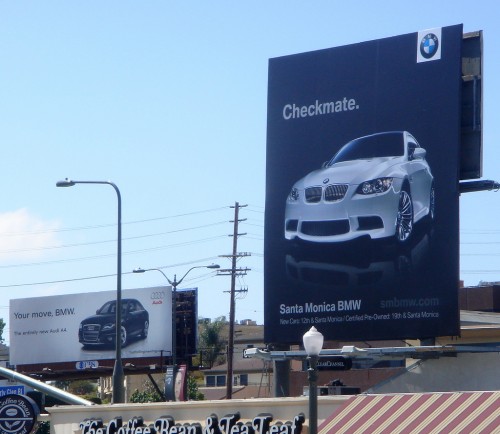 On the other hand, Apple has been relentless in its campaign, attacking vulnerable Microsoft positions. Moreover, Microsoft has chosen not to respond forcefully and relentlessly itself, thereby eroding its own position and leading to increasingly successful Apple sales and profits. Below is yet another in a series of Mac vs. PC Apple ads.

Domus is a full-service marketing communications agency based in Philadelphia. For more information about us, please visit our web site at http://www.domusinc.com.

Do Marketers Really Get Digital? Domus Does.

Madmen’s Don Draper is the latest proof that in advertising, the Idea is the Talent